Sarapesh
A city that's brick and mortar move between dimensions.
Where markets sell the rarest goods from a thousand worlds.
Where a hundred thieves guilds and a hundred oligarchs backstab each other for control.

The Shifting City is a combination system agnostic rpg setting guide zine and nine track dungeon synth album. It's got all sorts of great stuff in it, including:

This page is a great place to pick up the zine pdf by itself but if you want to grab the combo album/zine just head over to the bandcamp page.

Check out what people are saying about The Shifting City:

"We’re a big fan of material that is easily introduced into an already-running campaign in a given system, and The Shifting City hits that spot with precision accuracy. The included soundtrack is an extremely clever approach to appealing to more than just your eyeballs and it works great with the given composition of both the zine and the LP. They flow within each other and it truly creates for a unique reading experience." - LF OSR Blog

"It has great design. Black and white, minimal, clean layout, stark, accompanied by excellent line drawings. Fonts and their positions are played with but it’s not art-house or punk, more The Seventh Seal than The Holy Mountain." - Perplexing Ruins Blog

"I’m seriously impressed with the depth of flavor and  boundless potential of the tables within, which is only greater realized with the accompanying music. This is some new  old skool cool goodness!" - Curse of Sebs

"The setting is ripe for any willing imagination, and what’s here is generally just plain interesting to read." - Journey Through The Darklands Blog

In order to download this zine you must purchase it at or above the minimum price of $4 USD. You will get access to the following files:

What a beautiful and well written setting. It captured my attention and really made my imagination go wild. The pages are stunning and the music just amplifies the experience. I've found myself putting the music on in the background as I work. Bravo my friend.

Posted a first impressions look at this over at: https://perplexingruins.blogspot.com/

Whenever someone sends me something to review, I try to give it a quick look over, before filing it away on the terrifying Spreadsheet of Many that records my ridiculous backlog. It’s rare that I actually get something into my hands in a moment when I can just get into it kinda off the clock of regular review time, but with The Shifting City I put the first track of the LP on, got the PDF up and just drifted off to Sarapesh with the mysterious melodies of the synths.

I have to say I absolutely love the soundtrack and that the tracks are linked to specific sections of the Zine with the page/ track being referenced. The music as a whole other dimension and helps to whisk you away, as well as aiding with getting into the right head space for reading the prose, comprehending the lore and working with the various tables provided. The LP also doubles as a wonderful soundtrack to in turn help take your players off to this mutable, multicultural and mysterious city of wonders, bizarre bazaars of myriad merchants and magic items, thoughtful, thriving thieves’ guilds, and ponderous, preening Panjandrums trying to make sense of the chaos. The PDF is still rich on its own, bur the music certainly adds another facet of strangeness, making the transition from our mundane reality to the transient markets and mansions of Sarapesh, the Shifting City.

The zine itself alternates between prose that allows us to see the setting through the eyes of this discovering or part of the city. These vignettes offer the reader a window in, much as if they we able to get a look at a “transdimensional mirror”. These short pieces describe a shepherd coming across and marveling at the Shifting City, an overview of the lore and law of the Pandimenzional Bazaar, the business of the 13 Skulls thieves’ guild, a swashbuckling vigilante “dressed for peril” saving her family from destitution at the edge of her “toledo blade”, and introducing us to the ubiquitous phrase that sums up Sarapesh superbly, “the guilds and the panjis are at in again…”.

When it comes to mechanics, the zone has a variety of ta tables, including the talk of the market and the new wares on offer, a four step process for creating a thieves’ guild and the same did a panjandrum, and the detailed tables for a thieves hideout and a panjandrum villa with five levels of stature and the various areas, weaknesses, entrances and corridors. There are so many awesome ideas and nuggets of inspiration to create all-manner of awesomeness.

Finally, an example heist is included, showing one set of possibilities using all the tools provided to come up with a thieves’ guild, panjandrum villa, target, security, etc. These are complimented by the old skool artwork and annotated maps from Daniel Walthall. This is a whole heist adventure with everything you need to know to run the adventure, including a timeline of events, details on the NPCs and creatures. Involved and the bizarre owner and layout of the various parts of the human-sized octopus’ opulent home.

This is a wonderful system and setting agnostic zine and city that could essentially slot in anywhere and any when in any game due to the transcendental nature of every random atom of Sarapesh. With primary familiarity of D&D 5e, I could see this being worked particularly effectively into the city of Sharn in the Eberron setting or Ravnica in the Magic: The Gathering/ D&D setting of Ravnica.

I’m seriously impressed with the depth of flavour and  boundless potential of the tables within, which is only greater realised with the accompanying music. This is some new  old skool cool goodness! 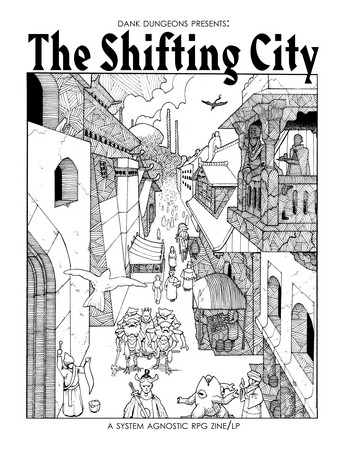 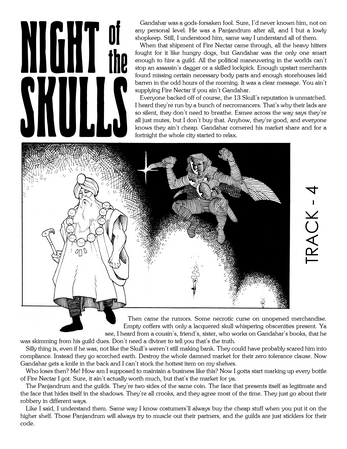 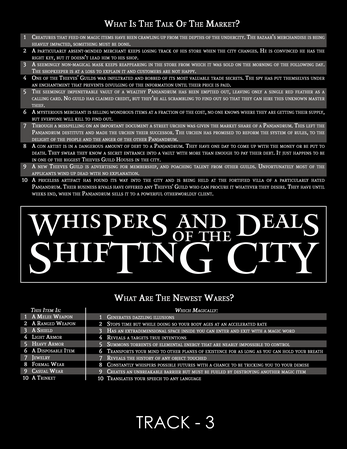 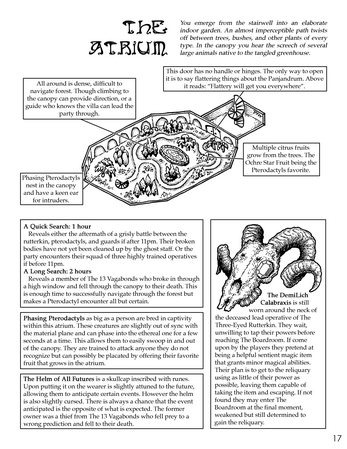